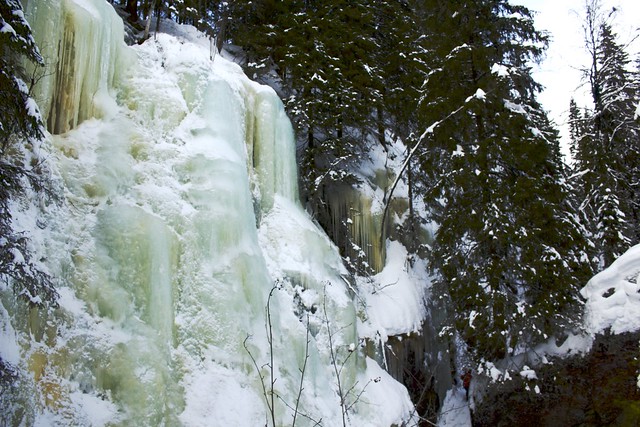 I love the outdoors. Finland just unfortunately is filled with snow for most the year and I am not a big skiing fan which is why there is rarely places I visit over the winter time to do some hiking. I also often live in the belief that the coolest places to visit are hundreds of kilometres away from where I currently live in Central Finland. Few weeks ago I was proven utterly wrong when I visited Hitonhauta ravine here in Laukaa, Central Finland. Hitonhauta was an absolutely incredible place to do some hiking and admire the area. 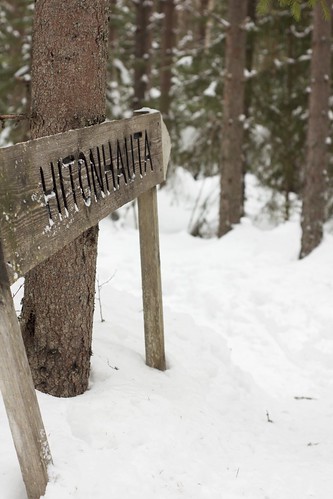 Hitonhauta is a large souvenir from Ice Age

Hitonhauta is an ancient remnant of the Ice Age. As the ice melted we were left with Hitonhauta. What makes this ravine special is the waterfall that freezes over winter time. The water that normally runs down the sides of the ravine freezes and creates beautiful natural ice scultures all around you. If someone would have told me there is a place like this in Central Finland I would have laughed but now I have seen it and have to just praise its beauty.

Hitonhauta can be easily accessed with a car from pretty much anywhere in Finland. We drove there from the centre of Laukaa which was maybe 20-30 minute drive to the destination. The city has placed handy signs on the roads that help you locate the parking area at the end of the road. Just note that if you put Hitonhaudantie to Google Maps it picks a random point of the road as your location so once you reach the road just drive until the end and ignore the “you have reached your destination” screams from your phone.

Easy day hike for everyone

Hitonhauta is an easy day hike for everyone. The route begins from the carpark towards the woods. During wintertime there is no official maintenance but you will see the footprints and wooden signs along the route. The path itself is a simple round route. The only time when you have to be careful is going down into the ravine and going to see the frozen waterfall as there the ground can be bit tricky. If you wish to make your life easier a good tool to take from home would be a walking stick that you can use as support when going down. 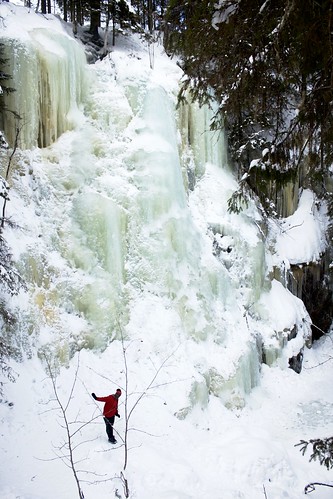 You can also easily grab a sled from home and drag the smallest hikers behind you. The route is not tough but the smallest legs might get tired over the few kilometre long walk. There is also a really nice lean to in the beginning of the trail where you can stop in the end and eat some snacks. If you are not going during the peak season it might be smart to grab matches from home as the lean-to might not have them. The firewood can be found from a nearby hut so those you do not need to carry.

The nature around the ravine is valuable so treat it with love. I loved walking in the area as the air was really clean. You could even see the clean air as the trees were filled with hanging moss. Hanging moss is a peculiar kind of moss that only enjoys clean air. Seeing it in such abundance all over Hitonhauta area made me extremely happy about our hike.

We decided to combine our trip to Hitonhauta with some arctic floating which you can do in Laukaa’s Varjola. Arctic floating is done in watertight suits that literally float in water. I have to admit that Arctic floating has probably been the most fun I have had in a long while. I love water and swimming and anything you can do in the waves which is why I of course was extremely happy when I got to float around in the icy water. Arctic floating in Varjola can seem quite pricy, 30 e for 15-30 min. I would though happily pay that again as it was so much fun!

When we got to Varjola we were greeted by our guide who took us to get dressed. You take your jacket, hat and any other “toplayer” clothes of before you jump into the Michelin man outfit. I suggest you wear skintight trousers, such as running trousers or a heat tech layer as that makes wearing the suit more comfortable. Then we waddled like penguins to the river and he zipped our suits up. The head part of the suit is really tight which can be bit uncomfortable but at the same time it keeps the water out.

Suits on and off to the river! The river was a bit frozen so I had to walk to a hole and then break the ice around it to float. In the suit you can stand in the water and feel the vacuum effect of the suit on your skin. The cold gets to your fingers in about 30 minutes but that is probably the longest one would survive in the water anyway. Still now thinking about floating makes me giddy and happy. Which means it truly was worth every penny!