I lived in Lahachowk village in Nepal, an hour away from Pokhara. I lived in a local family, which sons had moved away so they had an extra room for me. When visiting Nepal it is worth visiting villages aroudn the bigger cities. In the cities life has at times become very tourist centred but in the villages you can see the nepalese culture. Pokhara especially is very touristy due to the hikers and climbers who come to the city daily.

Lahachowk is part of the Kaski-district which is known as the Hilly-region. For a Finn these hills were mountains. The house I lived in was at the base of one of the hills, but above it rose a 1,5 km hill. Lahawhock has many ricefields and other crops. I arrived at the perfect time, as I saw the green crops during September, dry crops of October and the cutting of them in November. 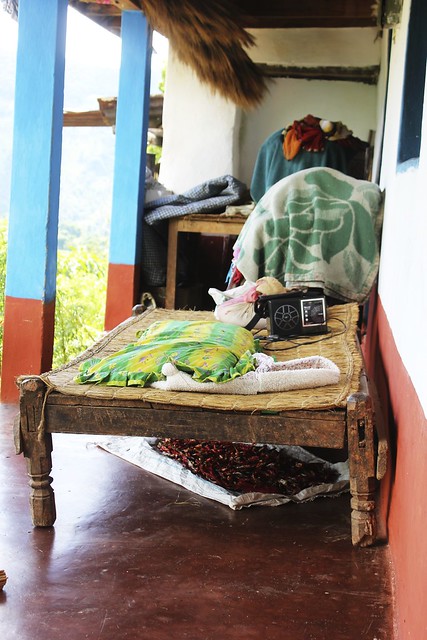 Everyday life in Lahachowk was simple. We woke up in the morning with sunrise. I woke up when Ama came to ask if I wanted Chai (tea). In nepali Cha means yes, China (“chaina”) no. These were useful as not everyone spoke understandable english. In the mornings Ama would sit and drink her tea on the seat and listen to music. After I drank my tea I would go for a walk and film around the village. Life in Nepal especially in the small villages is slower than what I had been used to. Of course I was also not there to work so that made life slower. Many men in the village live in the nearby cities as they work there. Roads between Lahachowk and Pokhara are so lumpy and bumpy that one could not drive it there and back everyday. This is why the village is mainly filled with mothers and children. 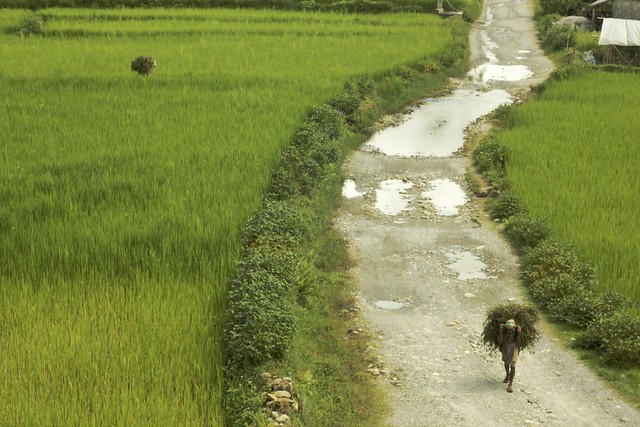 When I toured the village I also took photograph’s of the everyday lives of people. Life revolves around school and work. I saw women collecting hay for their cows and sheep. Women in the village, especially the older ones, rarely had jobs so their cattle was their only incolme. In the village you can also encounter the hospitality of Nepali people. Each visitor is offered tea and some snack; beans, nuts or instant noodles that make really good crackers when you leave them uncooked.

Nepali people are mainly wonderful, warm people who are kind to you as long as you respect their habits and culture. In Nepal you do not shake hands, rather than join your hands at your heart and say namaste. To elders and people in power you say namaskar as a sign of respect. As a woman part of the respectful behaviour was to cover your knees and shoulders. When I arrived I did not think this was a strict rule but I soon learned. One day I was sat outside our home in a top and an elder man came to tell me that was I not ashamed of how I was behaving. I took a scarf and covered my shoulders which clearly calmed him down. As a Finn the way women are treated was really hard for me to stomach especially due to language barrier which is why I could not argue my case. 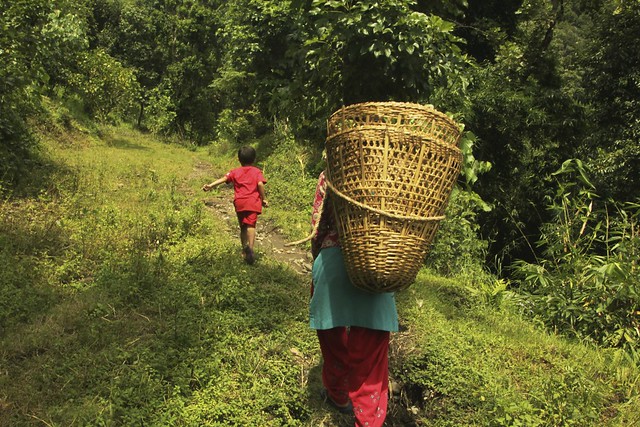 Language barrier was one of my greatest challenges in the village. I speak English fluently but that did not help when the people did not speak the language. I learned to use my body language quite thoroughly during my time there. I remember how during one video trip I had an entire conversation about an elderly man’s knee in signs and gestures. He sat next to me and gestured that he was in pain. I showed a sign and facial expression to ask why. He pointed at his knee and waved his hand to show he had fallen. I showed sympathy for his pain through facial expressions. Experiencing a complete language barrier is a good thing as you learn to use your body language, appreciate knowledge of languages and that you do not need a language to communicate.

In Nepal my constant companions were the children of the village. Small children spoke English almost fluently when compared to their adult counter parts. Children view the world more purely which is why the conversations with them were rich. I explored temples, toured the routes between rice fields and got to know the locals with my small tour guides. Children also taught me how to play cricket. Children also take you as part of their group without expectations. They are the best way to familiarise yourself with the culture as if you meet a child during your visit to a village they will probably also invite you to visit their home and have some tea.