Whilst visiting the Maasai Mara the visitors are offered a chance to visit a Maasai village. For a cheap price of 10 dollars one can see part of the local culture of the Maasai tribe. I enjoy learning about other cultures so of course we visited the village. The Maasai Mara in Kenya and the Serengeti in Tanzania are Maasai tribes lands which means that when one is marvelling the lions you are actually visiting their land. It makes sense that one visits them too whilst visiting the Mara.

The semi-nomadic Maasai’s do not live in stable constructed villages rather than temporary houses. The Maasai roam around their lands with their cows and sheep which is why the nomadic lifestyle comes in handy. When visiting the village it is good to keep in mind that these houses are not there for centuries.

The welcoming dance and jumping men

Upon the arrival to the Maasai village the visitors are welcomed with a dance. The local men perform their dance in unison whilst making low sounds. The dance in itself is almost hypnotic. The dance then incorporates high jumping which is probably one of the most characteristic features of Maasai men, seen in popular culture in places such as the new Samsung phone advert. The jumping has a very important purpose, as a man who jumps the highest gets the most beautiful wife. In the village you will see small boys jumping as well to practice for their future.

Out of the visitors the men were invited to join the dance. This welcoming dance was performed by only men which is why it made sense that only visiting men would participate.

When visiting the village it is good to remember that this is only one small group of Maasai’s. Maasai’s do not normally like foreign visitors and they have kept their culture. This is why one should also refrain from photographing the Maasai’s by the road as the Maasai’s are not all accostumed to touristic ways such as snapchat and photographing. This village which invites visitors allows the visitors to take photos and post them online.

When visiting the village a Western tourist should also be reminded that you are invited to their home. Cultures are different and traditions might not always be something you personally agree with but as long as you are invited to see something in someones home keep your attitudes to yourselves. During our visit the topic of polygamy amongst Maasai’s caused some of the people on the visit ask questions which made the locals seemingly uncomfortable. It is a privilage to be allowed to visit the village so please keep that in mind when you visit too.

Invitation to visit a Maasai home

After the dance the leader of the group shows the visitors the village. We were shown the cutest little goats and were allowed to see how the Maasai set fire by using a sword.

After the show you are invited to individually visit one tribe member’s home. This is because the houses are small and cannot fit more than few visitors at the time. In the house the people tell about their life and probably offer you to buy some of their artwork. Maasai’s are known for their artistry and their artworks are stunning to take home for yourself or as souvenirs.

The Maasai use the money they make from the visitors to upkeep the village and help their children go to school. The man whose home we visited had a small boy whose education our purchases will aid. 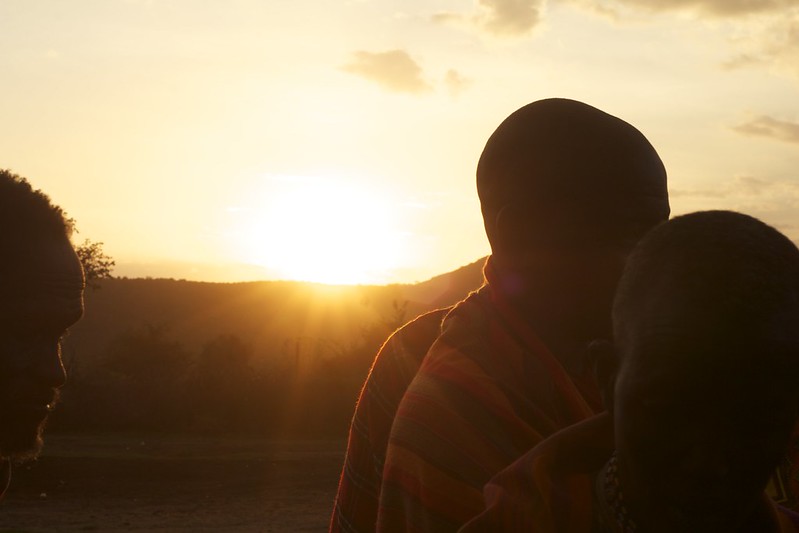 Sunset by the Maasai men.